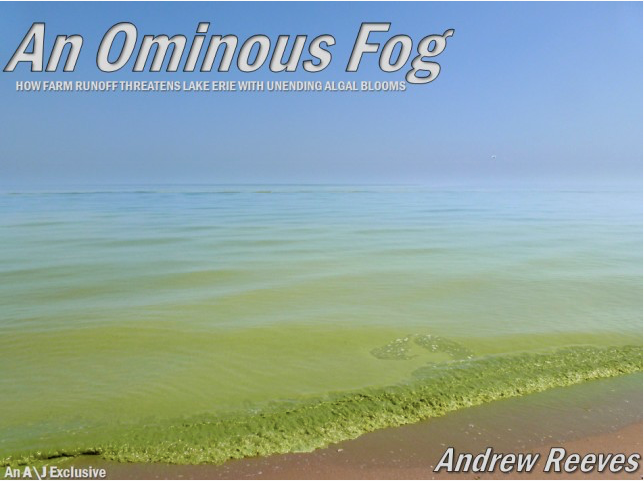 The algal blooms in Lake Erie that signal the end of summer and transition into autumn have come into full swing this week.

It reminded me of the piece I wrote for Alternatives Journal earlier this year, before the blooms arrived. I thought I’d share an excerpt and a link to the story online.

The blooms returned in 2002. Many hoped the toxic sludge of algae that blanketed the western and central basins of Lake Erie was gone for good, yet the volume of smothering plant matter was growing steadily. Summers from 2008 to 2010 were bloom-heavy in the shallowest of the Great Lakes. “And then we got 2011,” says University of Toledo limnologist Thomas Bridgeman. Following the wettest spring on record, algae populations skyrocketed, choking nearly 200 kilometres of Ohio beach from Cleveland to Toledo. Much of it was microcystis, a poisonous strand of blue-green algae containing the toxin microcystin that can cause nausea and liver failure in mammals. It can also be lethal. The drinking water of 2.8 million Americans was tainted with microcystin, exceeding the World Health Organization’s safe consumption limit by 1,200 percent. Dead algae sank to the lake bottom where it ate huge quantities of Erie’s oxygen as it decomposed, fabricating dead zones where sustaining life was impossible.

Then things got bad.

Check out the full story at A/J to learn more about what’s being done to keep algal blooms in check.

Editor-in-chief at Alternatives Journal. Author of 'Overrun: Dispatches from the Asian carp Crisis'. View all posts by awreeves